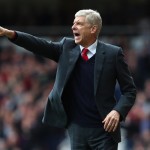 The Gunners could be 16 points behind leaders Leicester when they kick off against Crystal Palace on Sunday.

“It’s tight,” said the Frenchman. “We have to look behind us because everybody is chasing. But, as well, there could still be twists and turns before the end. We want to fight to still put pressure on teams in front of us.

“We need a strong run at home now and that’s what we want to do. It is perceived that the championship is over, but I don’t think that completely even if Leicester are in a very strong position.

“We have to fight until the last minute of the season. It would be over if we lost and they win, so that’s why we have to make sure that doesn’t happen.”