Reports are out claiming that Arsenal boss Arsene Wenger remains convinced of their title challenge. 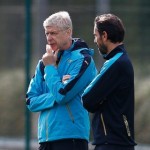 The Gunners manager was forced to again defend the direction of his team when addressing the media ahead of Sunday’s showdown with leaders Manchester United at the Emirates Stadium.

When asked if he continued to believe in a sustained title challenge, the French tactician said: “If I tell you now that we are three points behind Man United, playing Man United at home and I don’t believe that we can win the Premier League, what do you tell me? You will slaughter me.”

The Arsenal manager sees plenty of reasons to stay positive.

“I don’t see why we should be absolutely down, we are on the back of three or four good results in the Premier League,” he said.

“We had a disappointment in the Champions League, we have to analyse it well.