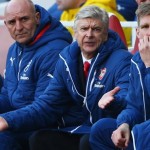 Reports are out claiming that Arsenal boss Arsene Wenger defended his players after their win over Everton.

The Frenchman insists his team do not lack ‘leaders’.

“Santi Cazorla had a great game as well, our defenders did well… I can understand that we got this kind of criticism after the game because it looked like that but it’s not permanent, it can sometimes be occasional that not everybody is focused on the right things in the game.

“I believe that we wanted to make the difference too much in the first game [against Monaco] and forgot our basics to defend as a unit. Today we came back to our basics and that was very important to find our confidence back.”