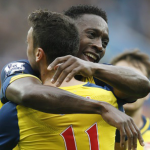 It has been reported that Arsenal boss Arsene Wenger is delighted Danny Welbeck is off the mark.

The former Manchester United forward opened his account for the season in victory over Aston Villa to leave Wenger delighted.

“It was a similar goal to the one he scored in Switzerland (for England), it comes from the left and he pushed it in because the timing of his run was good,” he said.

“He had a very good performance, kept the ball well and had a good all-round game.”