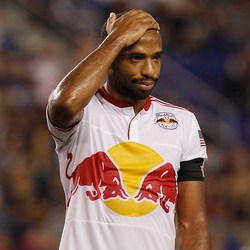 Arsenal boss Arsene Wenger is keen to have Thierry Henry return to the club during the MLS offseason.

The former Arsenal captain, 34, has used the opportunity to rejoin his old club after the New York Red Bulls’ Major League Soccer play-off campaign came to an end.

Speaking to Arsenal Player, Wenger said on Thursday: “Thierry was in with our training today, and he does not need to show how good he is.

“He just wants to stay fit and enjoy the football club again, because he is at home here and it is always good to have him back.

“When you are not the day before the game, it is possible of course for him to practise with the first team.

“It is always a lift to see what a big player he still is.”