It has been reported that Arsenal boss Arsene Wenger was delighted with Mesut Ozil’s workrate during victory over Everton. 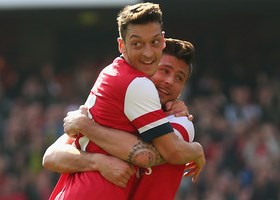 The German international was on the scoresheet in the FA Cup quarterfinal win.

Wenger said: “What I liked is that physically he looked regenerated, having more power in his runs. As well, what I liked was that he did a lot of what you would call ‘dirty work’. For a player like him, that means he tracked back in the first half, especially on the counter-attack, he came back with long runs and when he behaves like that, of course, you have a better chance to win.”