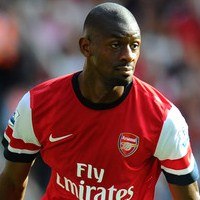 Arsene Wenger hailed the performance of Abou Diaby in Arsenal’s victory at Liverpool.

The France international midfielder was outstanding in the 2-0 win.

“You can see it is massive for us because he is a tremendous football player. He has absolutely everything you want in midfield. He hasn’t played for a year but he had a good pre-season where we had him 45 minutes every three days and now he looks in good shape. There is more to come from him but what he has shown today is very good,” said Wenger.

“I was worried about him highly but I always stood behind him because not only is he a fantastic football player but a fantastic guy as well. Let’s hope he survives the break because the national team travel a lot, play two games in four days and let’s hope he comes back in good shape.”