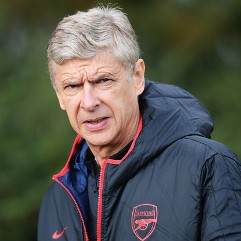 The 20-year-old’s first touch this afternoon was greeted by huge cheers, and he got through a testing 67 minutes, with Mikel Arteta’s late scrambled effort making it a positive afternoon all round following a testing spell for Arsenal.

“I made the decision without telling him because when you have not played for such long time it is not always easy to deal with that and there is a high level of expectation when he goes on the pitch,” said Wenger.

“I told him he was playing at 10.30am today. Sometimes I think it is better when you don’t have much time to think about it when you have been out for a long time.

“I also felt the confidence of the team was a bit jaded and sometimes player with experience and quality give a bit of a lift as well.”