It has been revealed that Arsenal boss Arsene Wenger was delighted to re-introduce Theo Walcott to action in victory over Southampton. 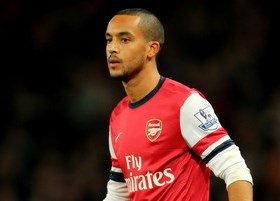 The 24 year old came on in the second half, the England forward having been sidelined with an abdominal problem which required surgery.

“You could see he is still a bit short physically, but he has not played at all for seven weeks and only one day training with the group, so that will come back quickly,” Wenger said.