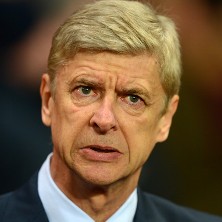 The Gunners dispatched French champions Montpellier with relative ease on Wednesday night at the Emirates Stadium, with Lukas Podolski firing in a superb volley after Jack Wilshere’s first goal in two years.

“We needed two good results – our result and the Schalke result – and we got both so obviously we’re happy,” the Frenchman said.

“I found Montpellier well organised, strong in their challenges and quite aggressive so for us it was a question of being patient, not making mistakes, using our experience and wait for a chances.

“The first half we had problems in the transitions to go from defence to attack and in the second half it was better.

“We moved the ball quicker, made more incisive runs and scored two goals.

“There was one for Wilshere, which I am pleased about because after such a long time out it is great to see him getting stronger and stronger. The second was fantastic by Podolski.”