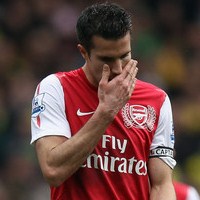 Reports are out claiming that Arsene Wenger does not want the Robin van Persie saga to drag on.

The Daily Mail reported that the Arsenal boss has told club officials he wants a quick resolution to the Van Persie saga – even if it means he has to sell his talismanic striker.

It is said that Wenger is keen to hold face-to-face talks with the Dutch international in the next few days to try to persuade him to sign a new contract.

But if he fails to do so, Wenger wants to sanction a quick sale of the 28-year-old forward.

The Frenchman would rather have the funds – and time – to reinvest than a repeat of last year, when the sales of Cesc Fabregas and Samir Nasri near the end of the transfer window disrupted preparations for the new season.