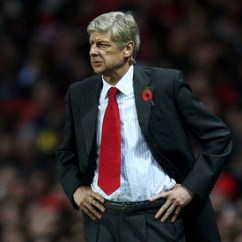 Arsenal boss Arsene Wenger is demanding no complacency from his players as the Premier League resumes today.

Having slumped to 17th in the Premier League in August, they now lie seventh.

But, ahead of today’s trip to Norwich, boss Wenger is worried that one slip-up could destroy all of their good work and bring back the gloom.

He admitted: “We have come from hell and if we’ve learned something it is to put 100 per cent effort in every single game.

“Our target is to come back to fight at the top of the Premier League. That is more important that anything else. It is vital that we come back from where we were in the championship.

“Usually once the devil has you in his hands he doesn’t let you go again. What I mean by that is that you are concerned that when the confidence level drops, it takes time to come out of it.

“Once you are 17th in the league you cannot say for a club like Arsenal that it is a comfortable position.

“It is still a warning in our head but I think we have shown remarkable mental strength and consistency since. Maybe to have gone through that helps us keep the urgency.” Wenger Must Not Have Liked Martial Or Son – Arsenal Legend Seaman