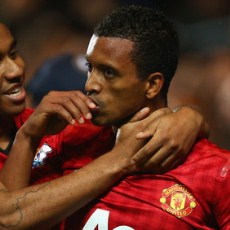 Arsene Wenger insists that Arsenal is not in the market for Manchester United winger Nani.

After victory over Newcastle United, The Frenchman denied suggestions he wants to sign winger Nani from Manchester United.

He said: “Nani? No. We don’t look at any player from United because players are under contract and I don’t think they would sell a player during the course of the season. They don’t need money.”