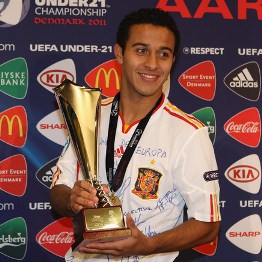 Reports are out claiming that Arsenal boss Arsene Wenger is keeping a close check on Barcelona midfielder Thiago Alcantara.

The People has reported that Wenger will step up surveillance on the Spanish youngster in the coming weeks before trying to land the 20-year-old in January or next summer.

The Gunners boss is such a fan that he asked for first refusal on the £25million-rated star as part of the deal that saw Cesc Fabregas move to the Nou Camp.

The Catalan giants were unwilling to make that deal but that will not stop long-term admirer Wenger swooping again.