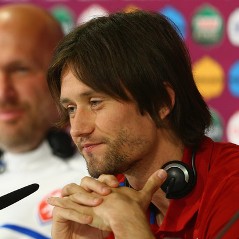 Arsene Wenger has admitted that Arsenal have missed Tomas Rosicky.

The 32-year-old has not played this season after injuring his tendon while on international duty with the Czech Republic at Euro 2012 during the summer.

Wenger told arsenal.com : “He had surgery of the plantaris tendon, that is situated down at the Achilles,”.

“It took him some time to recover. It was a similar injury to Scott Parker, and he is now back.

“I love Tomas Rosicky’s game because he is a guy who speeds things up. When the ball gets to him, he has good acceleration power because he has quick short passes and combinations with other players.

“I am an admirer of his game and want to keep him with us. He can play in the position of Santi Cazorla, and he can play with Santi Cazorla as well.”