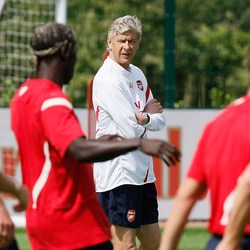 Arsene Wenger has admitted that he needs to add to his injury-hit squad.

While fans have been desperate for more signings, midfielder Gervinho and defender Carl Jenkinson remain their only new faces.

The French tactician conceded his team cannot afford any more injuries and hopes to make a least one more signing next week.

Wenger said: “I would have preferred to finish in the transfer market but it does not work like that.

“We have had some sleepless nights and we were working non-stop through the summer.

“The injuries are making things difficult. We start the season next week and then we have a Champions League qualifier.

“We need to qualify and hopefully we won’t have any more injuries from the international matches. We could be hit hard if we lose any more.

“Cesc is not ready to start a game. He has joined the group again. The rest is speculation.

“Nasri is out with an ankle problem. It is difficult to give Theo a deadline. He might be back for the start of the season.

“Koscielny has a muscle problem but it is not too serious. I am not sure about Jack and his ankle problem.”