Reports are out claiming that Arsenal boss Arsene Wenger has dismissed claims from Real Madrid over Mesut Ozil’s mentality. 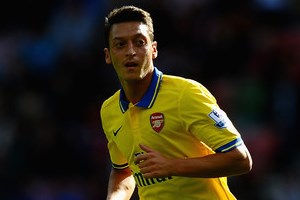 Recent reports suggest that Real Madrid president Florentino Perez has claimed that the German playmaker in fact asked to leave the Spanish club because “he couldn’t handle the pressure at Madrid”.

“No, I have not seen that at all,” said Wenger when asked if Ozil looked like a player seeking the easy life away from Madrid.

“Ozil has integrated well, and been well accepted.

“I think he is not at the top physically yet, overall we are very pleased to have him with us, but he will demand a bit of time to adjust to the vigorous body challenges he will face here in the Premier league.

“Once he has done that, he will be even stronger.”

Robin van Persie : Arsene Wenger Don’t Have To Explain Himself To Anyone!