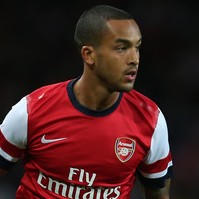 It has been reported that Arsene Wenger is hoping for a contract breakthrough with Theo Walcott’s advisers during the international break.

With eight months left on his existing deal, the England international can freely talk to overseas clubs from January 1 about a lucrative free transfer next season.

It is said that the former Southampton star wants to stay at the Emirates Stadium but the Gunners will have to improve on the £75,000-per-week offer that was turned down in August.

“We are always in touch (with Walcott’s representatives),’ said Wenger.

“He has character, Theo. He keeps focused and he wants to show he is 100 per cent professional and I have a big respect for that attitude.”