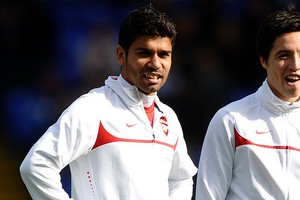 Arsenal boss Arsene Wenger has dismissed reports that striker Eduardo is set to leave the Gunners this summer.

Croatia international striker Eduardo has struggled for fitness since his injury against Birmingham.

The 27 year old has struggled to recapture his form since suffering a broken leg against Birmingham City in February 2008, and rumours had suggested he would be allowed to move on.

Wenger told Sportske Novosti : “Eduardo is an Arsenal player and I am expecting a lot from him this season,”,

“He had a terrible injury – he went through hell – but I think his workrate is fantastic and his determination, which is exceptional, will be of great use to Arsenal.”

Besiktas have reportedly shown interest in Eduardo, who joined Arsenal from Dinamo Zagreb in 2007.