It has been reported that Arsene Wenger believes Mesut Ozil was always going to have some difficulties in his debut season in England. 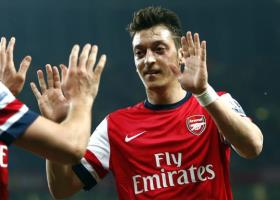 The German international hit the ground running with the Gunners when he first arrived from Real Madrid last summer but struggled through the middle stages of the campaign with both fitness and form.

However, Ozil starred in Monday night’s 3-0 win over Newcastle United with a goal and an assist which prompted Wenger to speak highly of his record signing who he feels will really flourish in his second season in the Premier League.

The Frenchman told Sky Sports : “He is getting stronger in every game now. He’s refreshed,”.

“It’s his first season over here and over Christmas he suffered a bit physically. Now he looks sharp again and refreshed, mentally sharp to play and that’s why his performance is good.

“I believe that the first season is always about adaptation in the Premier League.

“What he has brought is fantastic technique, simplicity in his game, intelligence of passing. If you look at his numbers, his assists and his passes in the final third are very good.

“We want some more goals from him and I think that will come naturally.”


Mikel Arteta Admits Arsenal Must Finish On A High