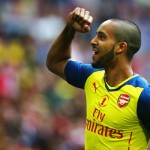 The Frenchman was speaking after Walcott’s impressive performance for their FA Cup final win over Aston Villa.

“I don’t see why he should not be here next season.

“He’s a player who was out for a year, January to January, and it took him a while to come back to his best. He’s now at an age where it’s very interesting. He has experience, he’s at his physical peak and it’s a time to stay with us.”