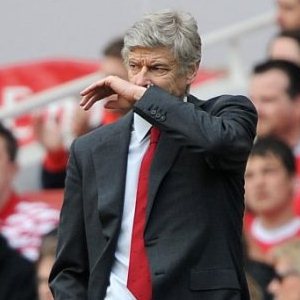 Arsenal played Liverpool in a highly entertaining 1-1 draw at the Emirates.

The match referee added 8 minutes of stoppage time and Arsenal took the lead through a Robin van Persie penalty in the dying minutes of the game.

Liverpool however fought back and won a penalty of their own to level the match at 1-1.

Arsenal manager Arsene Wenger was clearly unhappy that his team had dropped valuable points in their race for the Premier League title and showed his frustration to Liverpool manager Kenny Dalglish.

The pair exchanges some heated words and refused to shake hands at the end of it. Check it out. Danny Welbeck Assures Arsenal Fans : I Will Give 100%