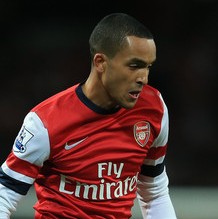 Arsene Wenger has admitted that he is frustrated that Theo Walcott is stalling on a new deal and wants him to decide on his Gunners future soon.

The 23 year old England international is out of contract this summer and would be free to sign a pre-contract agreement with another club in the January transfer window.

“He knows what I want and he has to make up his mind,” Wenger said.

“We have not made any progress. I have no news, I am frustrated.

“We are in negotiations for a long, long time. We have not been late in re-negotiations with him. We always try to extend contracts very early.”