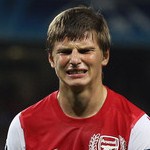 Arsene Wenger was happy with the performance of Andrey Arshavin in their Carling Cup win over Bolton Wanderers.

The Arsenal boss is happy to keep backing Arshavin, who he admits is a gamble with his passing.

“Andrey is a player who of course takes a bit gamble on nearly every ball he plays. Sometimes he loses balls he shouldn’t lose but when you look at the end of the game he has always had a big impact. Tonight he scored and made an assist. He had a good performance tonight,” said Wenger.

“You cannot play with two wingers and two offensive players like that, you are too short in midfield. He is normally a wide player but he wants to grow in a role behind the striker. Of course, he can do that. He plays where you want him to play but if you ask him honestly he will always tell you that he likes to play in there.”