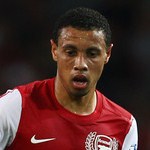 Arsene Wenger is convinced Francis Coquelin has a big future at the club.

The Arsenal boss believed his compatriot had a future in the back four but Coquelin’s progress while on loan at Lorient – and his performances this season – have convinced him otherwise.

“He is more a player who likes to cover ground than a player who starts from the back in a tactical position,” Wenger told Arsenal Player.

“He likes to be involved at the heart of things. A player’s position has to suit his personality. When that is not the case, in the long-term you have no chance.

“I always thought he would be a player for Arsenal Football Club but he is a little bit in the situation of Jack Wilshere last year – the loan out to a top division club has done him good confidence-wise.

“He has transferred that into our first team now. He was good at the [Under-19] World Cup with France, and he is moving on well and improving.”