Arsene Wenger Full Of Praise For Per Mertesacker 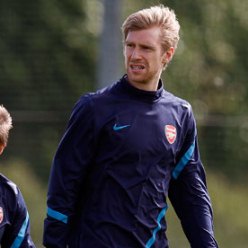 Arsenal boss Arsene Wenger felt Per Mertesacker was back to his best last night.

“I thought he had a great game tonight. I tried to analyse his performance against Norwich and I felt he was more tired from the Germany game against Holland. He didn’t make bad decisions but his reaction time was not right. It was more down to fatigue,” Wenger told arsenal.com.