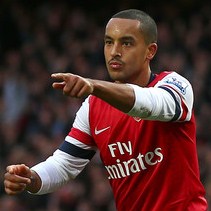 Arsene Wenger was full of praise for Theo Walcott after victory over Tottenham.

The Arsenal winger was outstanding in the 5-2 triumph.

Asked about the 23 year old’s contract saga, Wenger said: “We haven’t found an agreement yet but we will continue.

“He certainly doesn’t play like someone who wants to go. And I don’t behave like somebody who wants him to go.”

Asked if he would make Walcott an exception to the club’s wage structure, Wenger added: “We have 25 exceptions in our squad. We go always to the maximum we can afford.”

Radamel Falcao In Talks With Chelsea, Man City And PSG