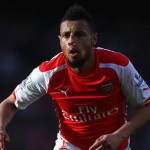 The French defensive midfielder collected a broken nose, but did not want to come off.

“He wanted to stay on. He didn’t play here for a long time so now that he plays, of course he doesn’t want to come off the pitch.”