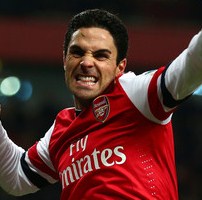 Arsene Wenger was full of praise for Mikel Arteta for his successful spotkick in victory over West Bromwich Albion.

After missing from 12 yards against Fulham in November, the former Everton midfielder kept his composure to score from the spot in either half against the Baggies as Arsenal won for the first time in four Premier League games.

The Arsenal boss hopes the win can galvanise his team’s season, and says he was impressed the character displayed by the Spaniard.

“When you miss a penalty in the last minute of a game and you come back and you take two, you can only take your hat off,” he said.

“It is not easy to do what he did. It’s funny because the keeper thought he had missed one on his right, so next time [went to] his left and he [Arteta] put it in the middle twice. It demands some nerves. He could be a good poker player.

“He is a winner. He is ready to fight to win. In the game, he shows that as well.”