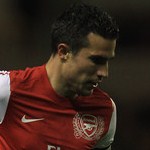 The Dutch international netted against a 17th different team in the same season with his penalty at Molineux and he has only failed to hit the target against Manchester City and Fulham.

It mirrored the achievement of former Gunners hotshot, Ian Wright, who scored against every other side bar Manchester United and Sunderland in a 38-game season during the 1996-97 campaign.

The Dutchman ended his four-game run without a goal to take his overall tally to 34 in all competitions this season.

Wenger said: “It is important for a striker, even like Robin van Persie who was not used to not scoring in the season, to find the net.

“He equalled the record of Ian Wright who scored against 17 different teams out of 19 in the Premier League.

“That is absolutely remarkable in the modern game to be able to do that. I’d like to congratulate him on that.

“When you only have 19 teams, and your striker has scored against 17 teams, that is something sensational.

“He could have beaten the record if he had scored against Manchester City at the weekend.” Arsenal Lining Up Carlo Ancelotti As Replacement For Arsene Wenger