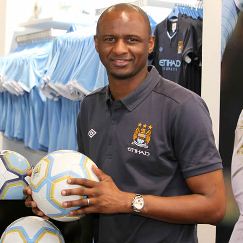 Arsene Wenger has identified the moment he felt he had the support of Arsenal’s fans.

The French tactician believes the signing of Patrick Vieira helped him win over the Arsenal fans at the start of his tenure.

“People like Patrick Vieira I have a lot of fond memories of – he was the first player I bought,” Wenger told a supporters’ Q&A at Emirates Stadium. ”

“When you buy your first one and he is the right one it gives you a lot of credit. I arrived here with little credit and Vieira, by coincidence, had the English qualities – he could battle with anybody – and also brought something from the technical French side.

“He had a great combination of the English fighting spirit, the bravery and the technical qualities of a midfielder.

“He is probably the one who gave me most credit and time to convince people that I could manage at this level.”