Arsenal boss Arsene Wenger has declared that he is happy to continue shopping in South America. 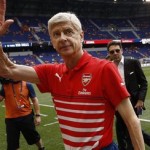 David Ospina and Alexis Sanchez have both arrived this summer.

The French tactician said : “We follow closely what’s going on in South America because I believe, in some positions, they are stronger than European clubs,”.

“Especially up front. If you make a classification of a world-class striker today, that’s in favour of South America.” Arsenal, Southampton To Do Battle For Newcastle Goalkeeper Freddie Woodman