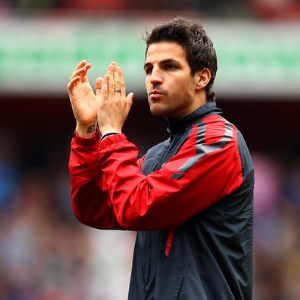 Arsene Wenger has revealed that club captain Cesc Fabregas will be at Arsenal next season.

The 24-year old Spanish international midfielder has long been linked with a return to youth academy club Barcelona with some reports indicating he will head back there this summer.

However the French tactician has re-iterated his stance that the star Gunner will remain at the Emirates Stadium.

“I expect him to be here,” Wenger said.

“I will fight very hard to keep him here. You have always to fight when you have a player of that quality.

“I believe the biggest pride for a captain is to be committed to his club and deliver trophies to his team.

“A player who changes every time when he is frustrated that he does not win a trophy goes nowhere.

“I believe the quality of a sports life is to be committed to his club and not just move on when it does not go as well as you expected it.”

And Wenger says that he also expects Fabregas to remain injury-free next season and help deliver for the North London club.

“I believe that Cesc Fabregas played 22 games this season out of 38,” added Wenger.

“We expect him next season to play between 30 and 38 and that will make a huge difference to our efficiency as well.”