Reports are out claiming that Arsenal boss Arsene Wenger has met with the agent of Barcelona attacker Alexis Sanchez. 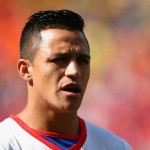 The Daily Express says Italian sources state Wenger has met with the Chilean’s representatives in Brazil to discuss a potential switch to the Emirates.

The 25 year old has been at the centre of fierce transfer speculation since the conclusion of the La Liga season, with Liverpool, Juventus and Manchester United all keen.

However Wenger has seized his opportunity to bolster Arsenal’s attacking options whilst in Brazil commentating for TV station TF1.