It has been reported that Arsenal boss Arsene Wenger hailed two-goal Aaron Ramsey after their 3-0 win at Cardiff City.

The Gunners boss claimed £50million would not be enough to tempt him to sell the Welshman. 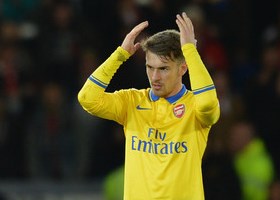 He said: “No. We don’t want to sell anybody, we want to keep the team together. I’ve suffered enough for years for having to sell the players.

“Now we are in a stronger position financially.”

Wenger also believes Ramsey can get even better.

“He keeps surprising me,” said the Gunners’ boss. “He has matured as a player and a person as well. We came here in the FA Cup a few years ago and he had a very difficult game. Now he shows how much he has developed as a person.

“I was a midfielder and I would have loved to have what he has.

“He can defend, attack and score goals. What more do you want? He is also young – another quality that I have lost.

“He can still develop. When you see the improvement in him in the last two years then why should he stop now?

“There’s more to come. If he continues to play like that then he will have a good future with Wales.”