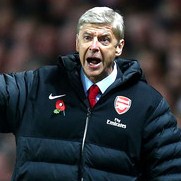 It has been reported that Arsenal boss Arsene Wenger insists the boo-boys haven’t unsettled him.

The French tactician was heckled by his own supporters at Villa Park, but the 63-year-old insists he is unfazed by the disgruntled fans.

“That some fans are not happy when you play 0-0 at Aston Villa, I can understand because I am not happy,” he said.

“I think I have always shown my 100 per cent commitment and loyalty to this club. I can only give my best and let people judge. The criticism does not hurt at all.”