Reports are out claiming that Arsene Wenger was delighted to see his Arsenal side register another clean sheet on Wednesday night. 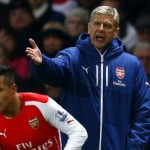 The Gunners held off Southampton before scoring late to win 1-0 at the Emirates Stadium which made it a trio of shutouts in a row for the north Londoners.

Arsenal defeated Borussia Dortmund 2-0 in the Champions League on Wednesday before edging West Bromwich Albion 1-0 on the weekend and the clean sheet against the previously free-flowing Saints.

“We deserved that because we gave very few chances away and had more chances than Southampton and because we kept a clean sheet,” Wenger told Sky Sports.

“It was a bit hard to get going at the start because we’d given a lot against Dortmund and West Brom. This was our third game in (eight) days.

“We had to dig deep against a good team that is very well organised. We had to be patient and wait for our chances.

“We have the right attitude and a good solidarity in the team, a good focus, and that’s a good basis for us.

“It was important to win because we lost our last home game and you could see the crowd was nervous.”