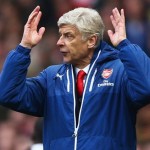 Reports are out claiming that Arsenal boss Arsene Wenger insists he doesn’t need a new goalkeeper thanks to David Ospina’s emergence this season.

But asked by the London Evening Standard if he was looking to sign a goalkeeper, the Frenchman replied: “No, not necessarily.”

He added: “I believe that (Wojciech) Szczesny is a very good goalkeeper and Ospina has come in and done a fantastic job. You look at the numbers in the Premier League and who is top of all the goalkeepers and you will see it is Ospina.”