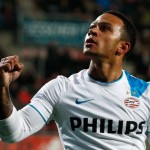 Asked about the importance of doing transfer business early in the summer, Wenger said: “What you want to do, more than do it early, is to do it right.

“You have to take the opportunities when they come up but that’s not only decided by your desire, sometimes it’s created by the club that sells the player as well.

“Fix your target, be on alert and do it when it’s possible.”

Wenger is a fan of Depay, but he was not a target for the Gunners.

“I like the player but he plays in a position where we have plenty in abundance,” Wenger added.

“He plays wide and we have eight players who can play wide in two positions.”