Arsene Wenger has declared that Arsenal were “never in” for Mario Balotelli and told Milan that Joel Campbell isn’t for sale. 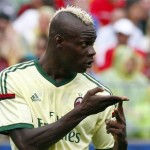 The Gunners boss spoke in his press conference this afternoon and shut down on-going transfer gossip about Balotelli.

“For weeks we were buying Balotelli from one minute to the other and it was all wrong. We were never in for him,” insisted Wenger.

“We do not master the noises that come out.”

He was also at great pains to point out Costa Rica striker Campbell, who spent last season on loan at Olympiacos, was not heading for Milan.

“Yes, Joel Campbell is part of my plans. He might play tomorrow against Benfica.”