Arsenal boss Arsene Wenger has declared that they are not giving up on the Premier League title. 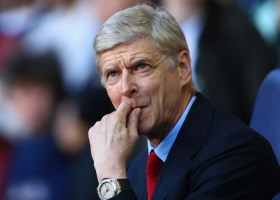 The Gunners are seven points behind Premier League leaders Liverpool and face a difficult trip to Everton on Sunday but Wenger insists shock results such as Crystal Palace’s win over Chelsea last week give him hope his side can still win the title.

The Frenchman said : “You don’t want to give up as long as you have a mathematical chance,”.