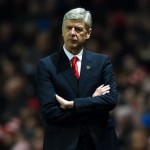 Reports are out claiming that Arsenal boss Arsene Wenger feels the race for the top four will be decided between six teams.

The French tactician was speaking after victory over Leicester City.

Asked about the title, he added: “No, I consider us in the top-four race.” Arsenal, Man Utd To Do Battle For Ilkay Gundogan