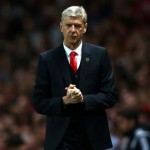 Reports are out claiming that Arsenal manager Arsene Wenger is well aware how beneficial it will be for his team if they can produce automatic qualification to the Champions League.

The Gunners drew 1-1 with Manchester United at Old Trafford on Sunday to remain in third position, two points clear of the Red Devils, who have one match remaining as opposed to Arsenal’s two.

Maintaining their grasp on third would mean Arsenal avoid summer qualifiers for Europe’s premier club competition which the Frenchman feels would hinder their preparations for the season proper.

“It takes the pressure off during the holidays and in the preparation period. It would be great to do it, but it is still to do,” he said.

Regarding the potential third-place finish, Wenger insisted he was happy: “If you had asked me in October, I would have said yes.

“Overall, of course you want to be first, but 17 teams would exchange a position with you.”