Reports are out claiming that Arsenal boss Arsene Wenger insists they were never in for Liverpool midfielder Raheem Sterling. 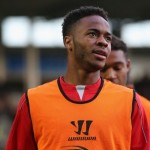 The England international is joining Manchester City for a fee of £49 million.

“It looked a done deal for a while because Sterling was adamant he wanted the move,” said Wenger. “It is a good buy for Man City. It is an expensive one but they can afford it.