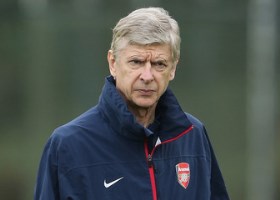 The Gunners were within two minutes of winning there in September 2011 and Wenger sees no reason why they should not adopt a confident approach again as they did on the last visit to Germany in March, when victory over the eventual European champions Bayern Munich kick-started a superb end to the campaign.

“We take belief from Bayern. We play everywhere to win and that will not change of course, we will have a positive attitude in our approach to the game,” Wenger said.

“We have played everywhere in Europe and always had the same approach and will be again like that tomorrow.

“It is difficult to predict what will happen, that is what makes football great. Dortmund are positive, we are very positive. At least that will guarantee both teams will try to win the game.”