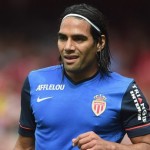 Reports are out claiming that Arsenal boss Arsene Wenger insists they won’t be bidding for AS Monaco striker Radamel Falcao.

The Colombian international striker has been linked with a loan move to the Gunners.

Their No.1 frontman Olivier Giroud could be out until January but Wenger has ruled out a move for Falcao.

Asked if the Colombian was in his price range, Wenger replied: “No.”