Arsenal boss Arsene Wenger insists that it is too soon to judge Serge Gnabry after his performance in victory over FA Cup opponents Tottenham.

The German U19 international produced a lively display from midfield. 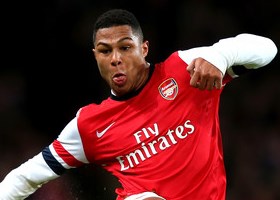 “He has had some good games but maybe we were not at home,” said Wenger of the Arsenal Academy product.

“Gnabry played well at Swansea, at Crystal Palace, and overall against Spurs he has shown that he is quality.

“He is a very young boy but he has the quality, is bright and he has a good football brain.”

Wenger continued: “I am a strong believer in Serge because I integrated him at the start of last season, but let’s not make superstars with one game.

“The top level is [about] consistency but I believe the ingredients are there. He has to show he can turn up with these performances in every game.”