It has been reported that Arsenal boss Arsene Wenger has likened Tomas Rosicky to Dennis Bergkamp. 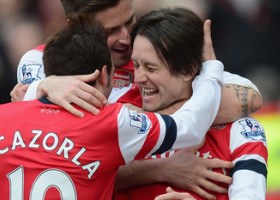 The 33 year old was outstanding in victory over Sunderland, which in part celebrated the unveiling of Bergkamp’s statue at the Emirates.

Wenger said: “Bergkamp got the statue, and I think Rosicky took the role of Bergkamp well.

“Certainly Dennis would have been pleased to see him play.

“I’m very pleased for Rosicky. I think he is maybe one of the players who plays the game of give and move. He is a great accelerator of the game. When the ball comes to him it is ‘Boof! It is second gear now’ and that is something I admire in him.

“He always makes things happen, not with individual dribbling but with individual acceleration of his passing and of his runs. I think when he arrived here he was less a tactical player and more the Mozart from Prague and he was purely a creative, offensive player.

“Today he is a real organiser on the pitch as well. I like to have him in the team because he gives a real structure.”