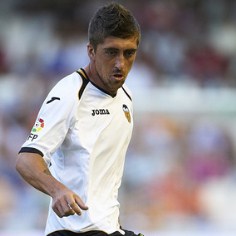 Interesting news are out and it has been revealed that Arsene Wenger is interested in Valencia midfielder Pablo Hernandez.

Cadena Ser has reported that the 26 year old has been added to Wenger’s shortlist of potential January deals, which also include Valencia teammate Dani Parejo and Real Madrid’s Esteban Granero.

Hernandez could be interested in moving to England after seeing good friends David Silva and Juan Mata make the switch in the last 18 months.