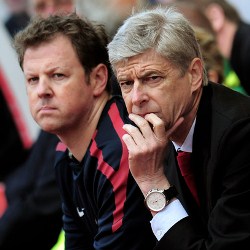 Rodriguez was named Player of the Tournament at this summer’s U17 World Cup and has been watched extensively by Arsenal’s Spanish scout Francis Cagigao, who has recommended his signing to Wenger.

AS says Wenger has now launched a bid for the striker and is already speaking with his parents about moving to London this month.

Real will be desperate not to lose Rodriguez, regarded the best of their U17 age group. Arsenal Closing In On £17 Million Deal For Yann M’Vila